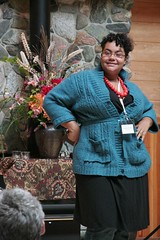 Maybe you know Ruckus Society, maybe you don’t. But for those of us who didn’t know Adrienne Maree Brown before today’s session, we won’t be forgetting her any time soon. For starters, she made us sing. I was fine with that but, not being a singer (in fact, being almost tone deaf) I didn’t know this meant standing up. One gets lazy once one has parked one’s ass on the floor.

So, we all sang a note (which one, I couldn’t say) and it reminded me of church. I’ve not been in a long time, but still, the music (when not in Catholic mass – unless midnite mass on xmas eve) is typically uplifting. And in fact, it set the tone for Adrienne’s talk, which ended with her calling our geek work divne, and the geeks among us holy! Holy @%!*; that’s a nice compliment.

Adrienne started her talk as she ended it – on a tributory note. She said that geeks are key to the survival of folks like her – activists involved in the non-profit sector working for progressive social change. The work of geeks – their various tools, programs, apps, whatever – acts as a conduit for the things social justice activists are dreaming of, imagining and planning for.

One of her central points, and an underlying theme of her talk was this: technology only works if there’s a huge loving idea behind it. The problem, or sticking point, is that geeks don’t think of it this when actually developing the stuff. Adrienne’s message: don’t sell yourself short – you are the Justice League!

I thought it charming and refreshing that this self-described "wannabe geek" was throwing down w/some who are arguably hard core techs. Her presentation was lo-tech – no power point (or mac alt) but notes in a "cool" book that she referred to on occasion to ensure she wasn’t rambling. But even if (or when) she did ramble – it was highly entertaining. That girl is fun-ny! Even her invocation of Jesus was a yuk, surprisingly.

Another main idea of Adrienne’s talk was the need for integration (or interoperability?)- of social change software in the non-profit sector, in order for the sustainability of progressive organizing. So, techs, stop function in "silos" and start talking to each other.

One of the most resonant points of Adrienne’s talk, however, was the need for a theory of how change actually happens. We need to have one. And in thinking about this, organizers need to consider some crucial points:

1. Impacted communities are the ones who create change. Often social change activists are "do gooders" – we put ourselves in the position where we try to do good for impacted communities. BUT revolution is a personal thing that happens in your heart; people come together when something big happens, and people are deeply affected.

2. Invest in people not necessarily resources. It’s about moving people from a state of lack to a state of abundance, from needing to doing, from aloofness to leadership .

Despite the term "open source", things aren’t always so open. Free software philosophy is not always practiced – we need to practice the change we want to see in the world. Share.

A closing point Adrienne made was this: We can’t expect to use the tools of the oppressor and expect a different outcome; that’s just dumb (her words)!! So what does this mean for techs? Build a new world through building a new technology. Developers are creating the systems by which we interact w/each other – this is powerful – let’s make something new! Not just a single killer app, but an integrated, holistic system that changes power dynamics, social relations – the whole thang.

PrevPreviousBack from Our Staff Retreat
NextStudent Farmworker Alliance Encuentro 2006Next