Adrienne Maree Brown is Executive Director of The Ruckus Society. She also serves on the boards of Wiretapmag.org, the Brower Center, the Allied Media Conference, and National Healthcare-NOW. Also known as a co-founder of the League of Young/Pissed Off Voters, Adrienne was co-editor of the youth organizing collection How to Get Stupid White Men Out of Office. As a writer, singer, and organizer, Adrienne has been involved in the growth of many organizations, most recently the New Orleans Network, the Future 5000, and the Arctic Indigenous Alliance. 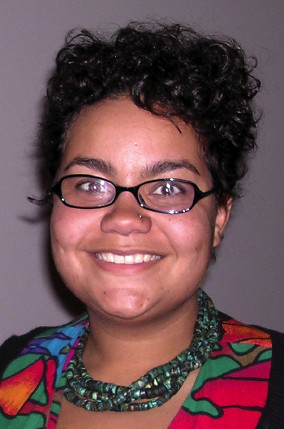 Localizing Hope
Brown’s talk had the flavor of a commencement address — advice to students for their entrance into the world of movement building.   Here is what I saw as her central question:

"Fear underlies hatred. How do we help people go from fear to love?"

She described a facet of her own work as giving people the experience of not feeling fear.  As she said this, I had a flash of what it might feel like to be unreservedly at home with others.  Maybe, I thought,  this would be similar to the victory over fear I imagine that the bannering  activists trained by The Ruckus Society achieve.  Look closely and you’ll see  in the photo below that there are two people hanging off the sides of the giant  banners — there so that police will have to negotiate before they cut the banners down.

A corollary theme in Brown’s talk was moving from grandiose hope that shuts down action — to hope that enables action because it is grounded in community  and realism.  This was not presented as a matter of thinking small ("We cannot be satisfied with tiny shifts toward the good," she said. "We need quantum leaps.") It was presented, I thought, as a matter of heeding the lessons taught by the  natural world and our interactions with others — connecting with real needs  and opportunities.

Grandiose hope makes our tasks seem too big to even start on.  If we say: "The world’s fucked up and our problems are so big we’ll never fix them in our lifetimes" we can’t expect more than a  few people to join us. If we frame all our issues in terms of what we’re fighting against rather than what we’re fighting for, we won’t attract adequate numbers of people to the cause. It doesn’t move us forward when our alternatives are unrealistic.  We’re not going to eliminate capitalism, for example. Even most activists won’t give up consumerism — technical gadgets, fast food,  whatever.  But we don’t need to ask people to give up what they love.  We can  ask them to love where they are.  We can, for example, focus on engaging with  local businesses.

Learning is at the heart of successful movement building.  This isn’t the same as saying to another person: "Your brain is an emply little bowl and  I’m going to pour all my bullshit into it.’  It’s a matter of deconstructing  falsehood and constructing community.  We must understand that nothing  ever disappears.  Look at the natural world.  The dinosaurs didn’t disappear.   New layers formed on top of their bodies.   Today’s capitalism is a layer that  we build on to get to communities that can sustain themselves.  We may think  that we need to go far or big to effect change.  But what is happening in the  world now is a result of how people voted in the small, red communities in the  United States, like some of those here in Eastern Washington.  So start in your house,  with your family. And come to the US Social Forum,  she said, June 27 to July 1, in Atalanta Georgia.  The Ruckus Society will be  there.