Ruckus at the Capitol Climate Action

[3/4 update: check out this great report about the action at It’s Getting Hot in Here].

Ruckus staffers and network members are in full force in DC today with thousands of others shutting down the Capitol Coal power plant for the Capitol Climate Action! Watch the action LIVE on the web HERE or below on this page!  And follow ruckus at the action on twitter by following ruckusociety.

Despite snow and cold, about 2,500 folks are currently shutting down the power plant right now in DC!

Once all gates were taken, Ruckus ED Adrienne Maree Brown kicked things off with a song, and now speakers have taken center stage at the front gate.

just spoke to thousands of folks from the solar van stage, now in place to risk arrest with tzeporah, ran, bill mckibben, ien, wendell berry, bobby kennedy, judy bonds and so many more!

adrienne was just interviewed for KPFA radio’s Flashpoints show, which will air at 5pm PST.

Scientist James Hansen and Bobby Kennedy have both spoken, decrying the absurdity of the notion of "clean" coal.

After a full day of occupying every gate of the Capitol Power Plant, 2,500 climate justice activists declared victory and marched back to Spirit of Justice Park! 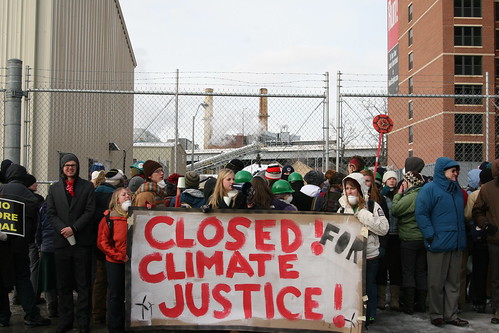 Twitter updates (in PST) from The Ruckus Society / ruckusociety.

03/02/2009 03:30 PM
ruckusociety: this is just the beginning. 1st shut down capitol coal. then we go to kentucky, new mexico, alberta, virginia, escalated actions…