I write this with the utmost pride: Three activists, including one of our beloved Ruckutistas, climbed up the suspension cables of the Golden Gate Bridge in an action to support Tibetan independence.

For those of you who may be caught off guard as to why, all of the sudden, the whole world is screaming Free Tibet — China has been occupying Tibet for over half a century, and throughout that time the Tibetan people have risen up in resistance. They have died in droves since then, while staying committed to nonviolence. Their leader, the Dalai Lama, has been leading in exile. Now, with the Olympics scheduled to happen in China this summer, and the theme of One World, One Dream, Tibet has a chance to raise awareness of the abuses and oppression of Chinese rule. They are raising awareness currently all along the Olympic Torch path.

San Francisco is the only city hosting the torch in the United States, and Students for a Free Tibet are responding. The message is clear and visionary: FREE TIBET!!! 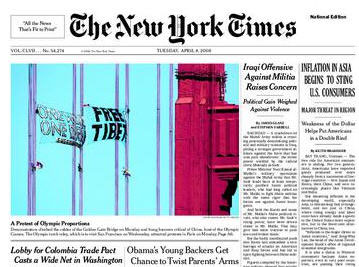 Actions in Paris and London have already shown one of the ugly truths of standing up against injustuce — the bravery of nonviolence is met with the cowardice of violence. This is true in Tibet, where 180 people have been slaughtered since March in their attempts to send a message to the world through the layers of repression of Chinese rule.

As the climbers pulled themselves higher and higher, I meditated on what this struggle is about. It is as fundamentally a fight against inequality and tyranny as the anti-apartheid struggle in South Africa…it is the old world of imperialism and inequality against a new world of sovereignty and spiritual wealth.

As the banners scooted across ropes strung between the three climbers, the news media gathered four helicopters, two vans, eight photographers. The news poured in: "traffic is stopped," "five people detained on the bridge," "two diversion teams." The story ran live on CNN, CBS, NBC, and ABC. The cameraman next to me finally said it: "They’ve brought the city to a stop. It’s amazing!"

And then the banner unfurled, white and black against the iconic red Golden Gate Bridge, and its gorgeous. "One World, One Dream: Free Tibet"

Seven activists are detained for $135,000 bail for the Tibetan dream. That dream of independence is our common dream, and we’re asking you to do one thing if you are moved by the strength and perseverance of the Tibetan people and Tibetan-led Students for a Free Tibet: donate to StudentsforaFreeTibet.org to support today’s action and the actions to come.

And check out these two links for a couple of visuals on the banner hang: